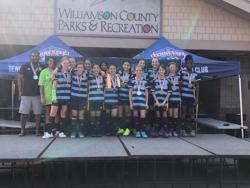 Coach Jon started playing soccer at a young age in Virginia with the Pumas FPYC, where the team grew from D6 to D1 under a passionate Brazilian coach who instilled the love and passion for futbol into Jon.   Life interrupted Jon's soccer career, but he is grateful he gets to share his love of the sport with his three daughters and United Soccer Club.

Jon began coaching his oldest daughter in NC during his military service and after his family moved  to Alabama,  Jon coached in the AYSO organization before meeting Coach Rusty by chance.   The Garcia family is now entrenched in the USC culture with Jon coaching the 07 Girls teams and the U7/8 Academy.  His wife, Tara, manages the 07 Girls.