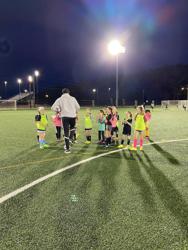 Olayinka Keith Ajayi was born in Kansas City, Missouri. He has 20 years of playing and coaching experience combined. Yinka started playing club soccer at the age of 8 with the Huntsville Web. In addition, he has played with the Green Mountain Cougars and the Rocket City Kicks club teams. In 1999, while playing with the Kicks, he helped his team win the Alabama State Cup. Yinka attended Sparkman High School where he played 2 years of Varsity basketball.

After graduating from high school, he attended Auburn University and graduated with a Bachelor’s in Electrical Engineering. He is employed by KAYA Associates, Inc. working as a contractor to NASA. Since fall of 2008, he has been coaching with United Soccer Club working with the '98, ’99, ’01, ’02, 03’, 04’, 05’ boys’ teams, and the '97 and ’02 girls’ team. Yinka currently holds a USSF National “D” coaching license.