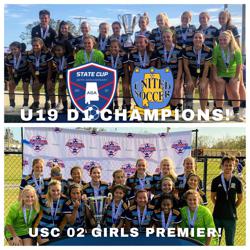 Nick grew up playing in the community for Kicks FC 93 Boys. He and USC coach Wouter Lassauw were team mates on a state championship Kicks team. Nick was a part of one of the four teams that helped form United Soccer Club in our inaugural season. He also played at Grissom High School and was part of the 2010 State Championship team in his junior season. After graduating High School, Coach Smith played soccer from 2011-2015 at Spring Hill College in Mobile, Al serving as team co-captain during his senior season.   He was an extremely high level player, with great soccer IQ, and has an excellent perspective on sports and life. USC is excited to have Nick back in town and on our staff.  He currently is an Assistant Coach at Randolph High School for the Varsity girls' program.