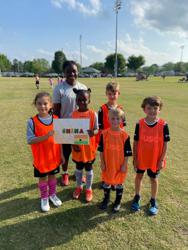 Alberta Bojang is a former member of the Ghana National Team. Coach Bojang moved to the United States to play soccer at the collegiate level for Alabama A&M University where she helped team win the South Western Athletic Conference in 2007. She has been a student of the game for over 30 years, and Alberta truly loves the game and hopes to pass on her passion for the sport to the players she coaches.

Coach Bojang is married and has two girls and has lived in Huntsville for the past 13 years. She has a degree in Accounting from Alabama A&M University, and currently works as an Accountant at Agri-AFC in Decatur.