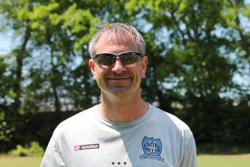 John was born in Pascagoula, MS and played with several select club teams from U12-U19 and was part of the Mississippi Olympic Development Program. John played high school soccer at Resurrection Catholic School (RCS) and helped the Eagles to consecutive playoff runs and was selected to two MS High School All-Star Teams. He played collegiate soccer at the University of South Alabama from 1990-1992. In the fall of 1993 he travelled to Stuttgart, Germany and played professionally for Division II and III teams in the Stuttgart Futbol Club organization. In the spring of 1994, he played for Mississippi State University Club team for three years with their team attending the national tournament two years in a row. John has also been a member of the Huntsville Premier Adult League "Lawdogs" Team since 1999.